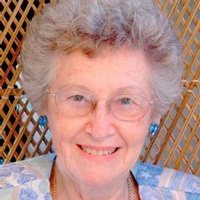 July 6, 2017, Jessie Clair Zabel Harrington at the age of 93 departed this earth to her eternal home.

Services will be held at St. Johns UCC church in Western, NE on Saturday, July 8, 2017 at 10:00. Interment will be at Plainview Cemetery, Western, Nebraska.

Jessie started school at age 4, graduated 8th grade in 1936, and Western High school in 1940. She taught school 1 year and then attended Wesleyan University for 2 years. She taught second and third grade at Nelson NE for 2 years. From May to Dec 1945 she worked in a mental hospital in NJ. She married Charles Frederick Harrington on June 13th 1946. She traveled around the country with husband and growing family until 1955, when they returned to Western, Nebraska. There the last of her six children were born. She moved into her last house in 1964 and lived there for over 50 years. In 2016 she moved into a nursing home in Wilber, NE.

She is survived by her brother Fred and his wife Sarah, all six of her children, Donald and Pat Harrington, David and Debra Harrington, Larry and Karen Harrington, Roy and Joyce Harrington, Kay and Joe Kottas and Sue and Bruce Pray. She had 15 grandchildren and 30 great grandchildren.

Jessie was preceded in death by her parents, her husband Charles, brother John Roger Zabel and his wife Eloise, sister Madge Bernice Zabel, and sister Carol Grace Zabel Hesselgesser and one great grandson.

Memorials will go to the Family’s Choice. Meyer Funeral Home in Western is in charge of arrangements.