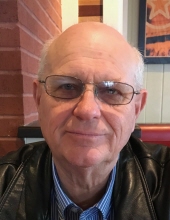 On March 4, 1948, Don was born in Nampa, Idaho, to Charles and Jessie Harrington. Don was the oldest of 6 children. His father was an electrician who traveled around the country setting up TV stations. Consequently, Don grew up on the road, you might say. As a child, he lived and went to school in 17 different towns in 5 different states: Idaho, Nebraska, Texas, Missouri, and Kansas. As an adult, Don has lived in 6 different states: Illinois, Maryland, Hawaii, Nebraska, New Mexico, and Texas. After high school in Western, NE, Don briefly attended the University of Nebraska. He worked as a flyboy for the Lincoln NE newspaper to support himself.

While growing up, Don learned all about electronics from his father and later when he joined the U.S. Navy, he served as a Cryptologic Maintenance Technician. He was stationed at Fort Meade, Maryland and worked in the National Security Agency with multiple highest security clearances. He later transferred to Hawaii where he worked on high security communications equipment under the Chief of Naval Personnel.

After honorable discharge from the Navy, Don moved to Hobbs, New Mexico and began work on microcomputers. Don was fascinated by all kinds of communication. He was licensed and certified as a Communications Technician, Two-way Radio Technician, and General FCC Radio/Telephone Operator. When cryptologic and other communications became obsolete, Don turned his interest toward computers and took an NRI course to build his own computer in the early 80’s. Don worked as a communications tech for Mobil Pipeline about 5 years and then worked for ARCO Pipeline for over 30 years. During this time, he continued his education at UTPB and Midland College, graduating in 2000. He retired in 2011 but continued doing contract work until 2015.

Besides electronics, Don was skilled in woodworking and built many cabinets and furniture for the family. He also excelled in electricity, plumbing, welding, home remodeling, etc. The only thing he didn’t like to do was painting. He was a do-it-yourself guy and jack-of-all-trades. He was not afraid to tackle any problem. He did insist on having the right tool to do the job. He had a special ingenuity for fixing things. If he didn’t know how, he just taught himself how. He loved to take things apart, just to see how they worked. Don also enjoyed coaching kids' soccer, being a Boy Scout troop leader, helping with Habitat for Humanity projects, helping with church maintenance, traveling, and, of course, playing with his grandchildren. Other special interests were antique radios and antique tractors, specifically Allis Chalmers brand.

In 1978, Don met and married his wife, Pat. Over the course of 40 years, they have lived in Hobbs, NM, Littlefield, TX, Midland TX, and finally near Tom Bean, TX. Don and Pat had 2 sons: Benjamin and Brian.

Don was a true believer in God and the Bible. He raised his children to be likewise. He was baptized on March 15, 1973 at the Pearl Harbor church of Christ in Honolulu, Hawaii. Don has faithfully attended churches of Christ the rest of his life. He is a Deacon at the church of Christ in Tom Bean, TX. He has always struggled with public speaking, but had learned to overcome it through serving in many capacities at church. His first time to ever lead singing was several years ago. He personally chose the songs: “Anywhere With Jesus” and “Blessed Assurance”, which will be sung at his funeral service. The family wishes that memorials be sent to the Tom Bean church of Christ, P.O. Box 507, Tom Bean, TX 75489.