A land stake on 160 acres of choice bottom land three miles northeast of Western along the Swan Creek in South Fork Precinct in 1861 by Michael Frederick Witt which was followed by a land grant signed by President Andrew Johnson in 1867, on this same property, earns for Roger Zabel of Western the family land ownership record in Saline County.

Michael Frederick Witt came to the United States in 1865 with his family from Germany where he had worked in the government forests, traveling first to Wisconsin and then to Johnson County, Nebraska, by ox team, moving west to Saline County on foot staking a claim along the Swan Creek on land which would make the family self-sufficient. Timber was plentiful along the creek for building and fire wood; a spring and the creek provided the necessary water and the rich bottom land gave the homesteaders their first sable crop, corn.
Other families who settled in the Swan Creek vicinity at the same time making the journey to Saline County together with the Witts were the Gutzmer, Dresher, Wahl and Fuenny families.
Michael Frederick Witt, who staked a claim in 1861, homesteaded 160 acres in 1867 and also purchased land as time went on, had built up his land holdings to 440 acres when he died in 1901 at the age of 87.
The land that is now farmed by Roger Zabel, a great grandson of Michael Frederick Witt, became the property of Witt’s daughter Mrs. Fred Zabel. The land in turn went to her son John Zabel, now deceased, and then to his son Roger, the present owner.
The land was worked by the owners all during these 99 years except for an eight year period when they were worked by a cousin.
The early development of the farm and family was recently told by Ferd Zabel, Roger’s uncle who lives three miles southwest of Western but who was born in 1879 in the first frame home built on the farm in 1868. Ferd Zabel recalls vividly many of his experiences on the “home place” and those told to him by his grandfather Witt. 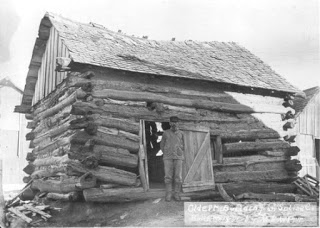 The Witt family first lived in a dugout while they built the log cabin, pictured above. In 1868, the first frame house, pictured below, was built and is today. is used today as a utility building. 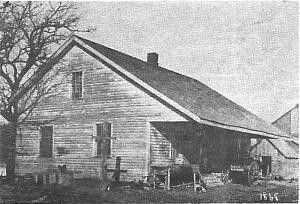 Ferd Zabel also told of the work his parents and grandparents did to provide the necessities for the family. ‘The clothes for the family were made from homespun; socks for the entire family were made at home. All the food’ was provided by the farm including main bill of fare-cornmeal with the corn being ground in a coffee grinder before the milling facilities were available in the vicinity. The families that came to this neighborhood together built a school house near where the South Fork cemetery is located today. This building also proviced the religious sevices for the settlers. Roger Zabel, who with his wife and five children-Floyd, Nancy, Betty, Linda and Mary-live in a new frame home, still maintains much of the early lore of his forefathers.

Last Saturday a threshing crew, complete with steam engine which is still in excellent condition, threshed oats. This week Roger and his family will have the old steam engine on display at the Saline County fair to delight young and old with its massive design, smooth and silent operations and the thrilling whistles

The steam-engine is a Minneapolis-Moline make with a 20-60 HP rating, which is a different rating from that of today. The engine will operate as silently as an electrical motor. The massive tractor has a chain fifth wheel guide